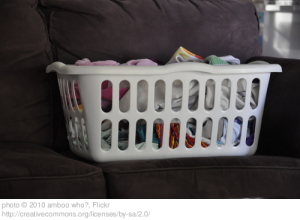 I’ve kept quiet for many years about this. Okay, not exactly, but mostly I suffer in silence. Since I started this blog I have taken the opportunity to sing my husband’s praises through it. And he really is the best guy around – a wonderful father and human being. But sometimes he really bugs me.

It’s not a marriage thing; anyone you spend a lot of time with will find it. That thing, that seemingly insignificant, small thing that irritates you like nothing else. Other people may barely even notice, but this thing will drive you batty. Perhaps I am more neurotic than most, but I have quite a few pet peeves.

Thankfully, Glen does in fact understand the correct way to load toilet paper: from the TOP people! He understands the need to put the toilet seat DOWN (which makes my first thing in the morning dash to the bathroom much more pleasant). I am forever grateful to my mother-in-law for raising a son who puts his dirty dishes in the kitchen, dirty socks in the hamper and dirty self into the shower.

After busting my butt to produce this minor housekeeping miracle, I expect the neatly folded piles of clean laundry, which have been conveniently delivered to each person’s room, to be PUT AWAY. Each of my children puts their own clothes away. It was one of the first chores they learned. Even the baby was doing her part (as soon as she was able to stand on her own – I’m not a monster). It could be because their mom is the laundry Nazi, but I like to think it’s because this incredibly simple task is the least they can do to assist me with my Very Important Work (aka: laundry).

We talked about it when we were first married and he agreed. Not a big deal… totally something he could do… he was happy to help, and yet it hardly ever happened. All week I would eye that basket of clothes on the floor while he rummaged through it for what he needed. Determined not to nag, I decided to just ignore it and see how long it took before he actually put his shirts IN the drawer. Five laundry baskets precariously stacked with a smattering of clean clothes in the bottom of each one and STILL he would rather hunt through the stacks than empty the things.

I like to think of myself as a reasonable, peace-loving human being, but this could very well have pushed me over the edge. He really wasn’t trying to be a jerk or disrespect me in any way. He just doesn’t see it. In fact, he floated the idea of doing away with drawers entirely, just living out of the baskets.

Eventually I realized that this little, but extremely crucial issue could cause our relationship serious stress. Relationships can be destroyed by the silliest things. Friends, siblings, co-workers, room-mates… pretty much anyone who is up in your face long enough for you to want to punch them in theirs. Of course, in the end it’s not about how to fold the towels or who is a better driver, but it can start there. The spark that starts the fire doesn’t need to be a big one. I watched a bitter divorce unfold with the major battle being who should clean out the garage.

I know wives all over the world have been putting clothes away for centuries without complaint, but somehow I got it in my head that I shouldn’t have to. And I don’t, I really don’t. But I decided that this would be my act of sacrificial love. It may not seem that romantic, but it is a marriage builder in our home.

For more than a decade I have been putting shirts, pants, socks and boxers away while repeating the mantra “an act of love, an act of love, an act of love.” To be honest, I don’t think he’s even noticed. Every once in a while that irritation sneaks up on me again, but it’s good for me. Glen says it all the time – love isn’t just a feeling, it is an act of the will. And in our house, that means drawers full of clean laundry.

So here’s me, grateful that he loves me by overlooking the garbage I leave in his car, clipping my toenails in front of the t.v. and even peanut butter breath.

I'm a bookworm, nature lover, kick-boxer, candy fiend, sci fi geek, home body, progressive Christian and part-time student. I love my crazy life and the messy, fun, stubborn, silly, brilliant people who populate it. END_OF_DOCUMENT_TOKEN_TO_BE_REPLACED
This entry was posted on Friday, September 30th, 2011 at 8:04 am and tagged with anger, chores, family, forgiveness, home-making, husband, love, marriage and posted in home-making, marriage. You can follow any responses to this entry through the RSS 2.0 feed.
« Everything Must Change
Embracing the Raggedy Edges »

2 responses to “The Flaw”