The Winding Road to Baker Street: A Guest Post

Welcome to my very first Guest Post, and to sweeten the pot – a Free Prize! Everyone who leaves a comment on this post before April 10th will be entered to win an e-copy of Angela Misri‘s brilliant debut novel – Jewel of the Thames.

When I think of Angela, certain moments come to mind: my first meal of authentic Indian food, dressing up in a sari, whispering into the night and between classes about the great mysteries of life (that’s right – boys). I assumed, the way teenagers do when life is supposed to make sense and you don’t know what you don’t know, that Ang would grow up and become a writer. Of course she would. It seemed so simple.

But life is never a straight line.

There are these moments that <dramatic music please> change your life forever. Christie can attest to this, she and I have shared one or two of these moments over our 20-year (!!!) friendship. These are the moments that led to Jewel of the Thames becoming a reality.

Everything changed for me one spring day in 1992 at an assembly in the gym where, as per usual, I was giggling and whispering with my friends in the audience. Suddenly my name was called by the Principal of the school and I was jostled out from the safety of the herd and to the front of the room. Having not really listened to the preceding speech, I was shocked to learn that a poem I had written as part of a school assignment had been published in an anthology of like-quality poems by Canadian children. The Principal smiled the biggest smile I had ever seen on a teacher, and handed me a copy of the coil-bound anthology, turning me back towards the audience of my schoolmates and starting the applause that followed me back to my safe haven between her best friends.

That was the moment when I discovered that despite being of Indian descent, there were in fact other options for your life’s work than medicine or engineering.

You would think that that moment would be enough to put me on the right path, but no, I struggled gamely through two years of pre-med, an MCAT and a summer dissecting cats in a neurology lab (no, really, it happened) before taking my first University-level Shakespeare course. The class was a requirement for the BSc I was clawing my way towards despite terrible grades in math and physics.

I was getting an A in the class and thoroughly enjoying it, sad that it would be ending, and sad I would be leaving my favourite teacher, Dr. Batycki when on the very last day of class she called me over. My classmates and I were lazily talking amongst ourselves about the spring and plans for the summer, so I remember feeling very comfortable and happy that day. Dr. Batycki stepped outside the classroom, holding the door open for me, and then grasping both my hands in hers, proceeded to tell me that I was a writer. No, not just a person who enjoyed reading and writing, but a person who SHOULD be writing. I of course denied it, explaining that I was going to be a doctor, that maybe someday I would write medical textbooks (my father’s suggestion when years earlier I had asked about writing as a profession) but I was not a writer – that’s just something I did for fun. She smiled at me then, and took up my hands again (which I had dropped in shock and denial) and just said it again, “You are a writer, Angela,” and then patted me on the shoulder and went back into the classroom.

That was the moment I discovered that you can deny your destiny all you want – it will, like Lady Macbeth’s spot – mark you forever to all who meet you.

Between that moment and my truly horrendous marks in math, I switched to English Literature, and excelled, moving further and taking a Masters in Journalism before my 23rd birthday. I wrote my first full-length novel in those years, a historical fiction set in 3B.C. India called ‘Savitri,’ and many poems that will never see the light of day if I have my way. I also wrote a thesis about Sherlock Holmes that would set the stage for the Portia Adams Adventures. It was a psychoanalysis of the great fictional detective in which I postulated that he was bipolar. It was incredibly fun to research and write and allowed me to read everything about Holmes and Conan-Doyle and many of the other authors who had taken to writing about the Baker Street detective since then.

You remember Galadriel’s lines at the beginning of the Lord of the Rings trilogy? “And some things that should not have been forgotten were lost. History became legend. Legend became myth. And for two and a half thousand years, the ring passed out of all knowledge.” Ok, so my writings were not lost for that long, but for almost 10 years, while I was excelling in Digital Journalism at the CBC and raising my son, I barely wrote anything that wasn’t a news story or a web documentary.

Suddenly, on a trip to San Francisco, I was so inspired by the landscape and colours of the desert that I started writing a short story in my moleskin notebook. That story grew to over 80,000 words of a time-travel novel and inspired more writing, and more poems and suddenly I was writing all the time – stopping only because my hand would cramp up around my pen. I wrote on the train in to work, I wrote at lunch time, I wrote on the ride home, I wrote and I wrote and I wrote.

During my last two years at the CBC, I that novel set in San Fran plus three books about detective Portia Adams – 35 moleskin notebooks in all.

During my last two years at the CBC, I wrote that novel set in San Fran plus three books about detective Portia Adams – filling 35 moleskin notebooks in all.

That was the moment when I discovered that I should write novels.

Finally, the pressure of having all these books written with no one to read them got to me and I hung up my headphones (I worked in radio, follow along people) and left the CBC to get published (again).

Life is about moments. These are the ones that led to me becoming a novelist. 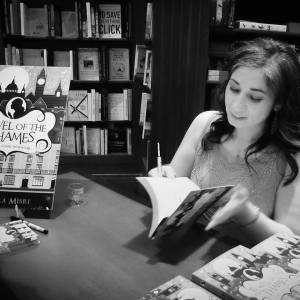 Angela, the real life author, at a book signing!
Photo by Wayne MacPhail

I’ve already given my review of the book itself, but judge for yourself. Here’s a brief synopsis: 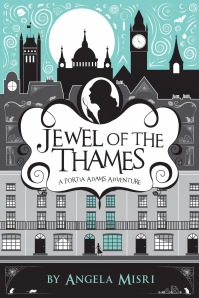 Set against the background of 1930s England, Jewel of the Thames introduces Portia Adams, a budding detective with an interesting — and somewhat mysterious — heritage.

Nineteen-year-old Portia Adams has always been inquisitive. There’s nothing she likes better than working her way through a mystery. When her mother dies, Portia puzzles over why she was left in the care of the extravagant Mrs. Jones but doesn’t have long to dwell on it before she is promptly whisked from Toronto to London by her new guardian. Once there Portia discovers that she has inherited 221 Baker Street — the former offices of Sherlock Holmes and Dr. Watson.

Portia settles into her new home and gets to know her downstairs tenants, including the handsome and charming Brian Dawes. She also finds herself entangled in three cases: the first involving stolen jewelry, the second a sick judge and the final case revolving around a kidnapped child. But the greatest mystery of all is her own. How did she come to inherit this townhouse? And why did her mother keep her heritage from her? Portia has a feeling Mrs. Jones knows more than she is letting on. In fact, she thinks her new guardian may be the biggest clue of all.

So here’s your big chance, leave a comment here (before April 10th) and you can win a FREE e-copy of Jewel of the Thames! Answer a question, or simply leave your name to be entered into the draw.

What childhood dream have you recently reclaimed?

What moment has changed the trajectory of your life?

Which fictional detective do you most closely resemble?

I'm a bookworm, nature lover, kick-boxer, candy fiend, sci fi geek, home body, progressive Christian and part-time student. I love my crazy life and the messy, fun, stubborn, silly, brilliant people who populate it. END_OF_DOCUMENT_TOKEN_TO_BE_REPLACED
This entry was posted on Thursday, April 3rd, 2014 at 5:00 am and tagged with Angela Misri, becoming a writer, book debut, jewel of the thames, life changing moments, life long friendship, novel-writing, Portia Adams, writing and posted in favourites. You can follow any responses to this entry through the RSS 2.0 feed.
« What I’m Into: March 2014
The Stranger: A Short Story »

11 responses to “The Winding Road to Baker Street: A Guest Post”