Tag Archives: being myself

The Hair of Power

It happened all the time. The park. The grocery store. In line at the bank. Perfect strangers petting my head and telling me all about the one person in their life/neighbourhood/AA group who was JUST LIKE ME.

I hated it. The attention and the touching and the stories about people I didn’t care about and would never meet. I was tired of nodding politely. And I REALLY couldn’t stand that inevitable question that made absolutely no sense to me:

“Where did you get such beautiful red hair?”

At some point during my preschool years I perfected the snotty answer.Snort of disgust. Curl of the lip. Delivered in a what-kind-of-idiot-are-you-anyway tone.

As much time as I spent as a child wishing I had wavy brown hair down to my knees like Crystal Gayle, or blond hair and a tan like Barbie, or best of all, dark raven tresses just like Diana Barry – as an adult, it’s one of the things I like most about myself. Finally old enough to dye it away like I always wanted, and I never will (highlights don’t count mom).

And if I occasionally find myself petting some strange child in the supermarket and gushing over their beautiful red hair… well, I’ve earned it.

So here’s me, with a head full of impossible, thick, frizzy hair my stylist nicknamed “The Beast”, but I still like it.

Today I took part in Five Minute Friday at lisajobaker.com

Breaking Up With Normal 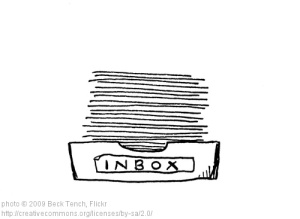 I’m sorry. I’ve chased after you most of my life. But I’m done. We’re through.

I know it’s not cool to break up by e-mail, but it’s your own fault. Despite your constant presence in my life, you’re hard to pin down. We don’t really talk. It’s all hidden pressures and unspoken expectations. Not healthy at all. I’m not angry. Really. I’m just done.

After all this time, I’ve outgrown you. I’m finally ready to admit after more than 30 years that you’ve never been my type. Because a relationship like this shouldn’t be so hard.

I’m tired of checking with you about what I should wear – sometimes your suggestions are uncomfortable. And I know we never saw eye-to-eye on hair. You make me nervous when we go out. What should I talk about? Which opinions can I share? What parts of myself should I hide? I know you’re thinking “the hair, that crazy hair” – but I kind of like it the way it is. So there.

It’s not all bad. I’m glad that you are recycling more and have dialed back the racism. But I hate the unhappy marriages, the workaholism and anorexic body ideals. Democracy is great, but it’s not always the best way to decide what is good and right and true.

If that’s not enough, you’re constantly reinventing yourself. And it’s exhausting juggling the different versions of you. There’s “Church Norm” who’s really into Jesus-talk, but kind of gossipy and judgmental. She tries to do a lot of good, but is arrogant and clumsy about it. “School Norm” talks a good game, but expects everyone to act and learn and regurgitate in exactly the same way. She’s inflexible and competitive, and sometimes more of a hindrance than a help to learning. “Hipster Norm” prides herself on being edgy and enlightened, but often forgets to be kind. Cynical and sarcastic makes for a funny punchline, unless you are on the other end of the punching.

Without even realizing I was doing it, I’ve tried to keep up with you. And I don’t like juggling the different versions of me either.

I’m ready to just be. Rough edges, awkward pauses and comfortable pants… the me who isn’t trying so hard.

I’ve met a lot of someones, actually. People who dance with their dogs competitively. People who sell their belongings and move to Africa. People who dress up in costume for movie premieres. They’re offbeat. Out of step from the rest of us. Flat out weird sometimes. Which kind of freaks people out.

But here’s the thing: they’re awesome. They are fun and passionate and not afraid. And that’s looking pretty good to me right now. That’s what I want.

I hope we can still be friends.

There’s nothing wrong with you. I’ll raise my children to respect you. I’ll teach them to be appropriate, even socially acceptable. But they are special and unique and ultimately, I don’t see you as a life long companion for them, either.

We’re just not that into you.

I’m sure we’ll run into each other from time to time. After all, you’re insanely popular. That’s kind of your thing.

So, no hard feelings, k? I wish you the best… or the average, rather. Cause that’s more “you” after all.

6 Comments   |  tags: being myself, breaking up with normal, DPChallenge, email, non-conformity, post by email, self expression, Weekly Writing Challenge: Mail it In, weird, writing challenges | posted in creativity, personality