Today I sat through a terrible sermon. There was no outline, no sermon notes, not even points on the screen (staple ingredients in any contemporary church experience). While the speaker seemed kind and genuine, he was afflicted with the most greivous of all pastoral sins… he rambled.

Round and round it went and it was often hard to discern what his point was. The object lesson may have been interesting, but he forgot to explain it and we couldn’t see it anyway (we were sitting in the third row). I was torn between annoyance that he didn’t plan his talk properly and sympathy that he was floundering in front of all these people.

I wish I could leave it at that. A few mocking comments about the haphazard preacher and a self-deprecating confession about my tendency to play the critic. Perhaps some observations about their children’s program or the interesting art on the walls. Keep it light and impersonal: a humorous recounting of a visit to my cousin’s church.

But, then he had to go and say it – that thing I’ve been chewing on for days. In “Christian-speak” I would say: “the Lord has laid it on my heart” which sounds a whole lot more spiritual than “I suck and I can’t seem to stop thinking about it.”

Apparently, God doesn’t need an eloquent speaker, an eager audience or even (gasp) a sermon outline to make His point. Ya, he was talking to me this morning.

It started last week when I spent the day with my sister. I was telling her, yet again, one of my ‘they done me wrong’ stories. It’s a doozy.

I was right and they were wrong.

I was hurt and it was their fault.

I come out looking like a hero and they are the heartless villains.

It really happened. It’s dramatic and interesting. It’s one of my favourites. And she’s heard it… several times according to her.

Modern english has a word for this:  the habitual retelling and reliving a hurt. It’s called a grudge. I don’t have many, but I keep this one in pristine condition. I am ready at the drop of a hat to pull it out and polish it up again.

Despite what pop psychology may teach, the bitter diatribe is not a healthy venting of emotion. It is the bread and butter of unforgiveness. Telling this story has reinforced my negative attitude towards people I honestly care about. It colours my perceptions of everything they say and do, until they really can do no right in my eyes. Even worse, I spread the poison to others. I come away feeling validated and leave their reputation in tatters.

Unfortunately I am not perfect. This fact often irritates me, but it is one of the theological concepts I am not remotely fuzzy about. I am in constant need of forgiveness. What a hypocrite I am to refuse to give what I have received myself. Forgiveness, not in theory, but for real and for good.

“…and forgive us our sins, as we have forgiven those who sin against us.” (Matthew 6:12) 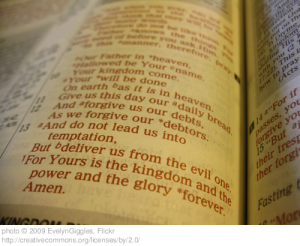 As hard as it is for a life-long chatterbox like me to admit, there are some things that don’t need to be said out loud… ever. Even though I know you are dying of curiosity, you will never hear the story from me again. And that’s a promise.

So here’s me, finally shutting up about it.