The Best Way to See NYC

She’s a lot of fun – my travel companion, my new friend. She laughs when I do and sees humour in our misadventures (which is fortunate, because we’ve had quite a few). She’s patient with my map-fumbling and missteps. We’ve seen the same streets of NYC several times over, ridden the subway in circles and taken the ahem, long way, several times.

Don’t get me wrong, we’ve had our spats. She thinks she’s always right. Since I KNOW that I’M always right, it’s a problem when our respective rightnesses clash. What’s worse, I’ve learned that older isn’t always wiser and have had to concede to being slightly less right than her a few times. Ouch. She’s even less gracious in her concessions than I am. Like mother, like daughter, I suppose.

Getting the Party Started

The red-eye flight out here was no picnic. After only 30 minutes of sleep I startled awake knee-to-knee and nose-to-nose with the unfriendly man in the next seat. Like most Canadians I find this level of unintended intimacy deeply disconcerting. I spent the rest of the night watching Downton Abbey reruns through bleary eyes. I’m afraid that no amount of Earl Grey can produce chipper after a night like that.

We yawned our way through the Museum of Modern Art (which was amazing nevertheless), Times Square (overwhelming), and the world’s worst tour guide. Finally, I understand how very annoying it is to my children when I start a sentence, trail off and leave it hanging in mid-air.

Tired, but still ecstatic to be here, we found refreshment in Little Italy. Is there anything a truly great piece of pizza can’t fix?

We stumbled into bed with visions of Broadway shows dancing in our heads.

NYC is full of New Yorkers

We nibbled at the Big Apple for the next 2 days. And it was delicious! There is something invigorating about this boisterous city and it’s Babel of languages and ethnicities and colours. We saw the Statue of Liberty, the Harbour at nighttime, the Natural History Museum, Central Park, the Metropolitan Museum of Art, the 9/11 Memorial and the inside of WAY too many stores.

The tour book said not to greet people on the street, because they’ll think you’re crazy. After a few polite smiles and head nods I can report that this is, in fact, true.

Not only that, but they won’t get out of your way. At one point a man came to a dead stop directly in front of me. He wouldn’t shift left or right. Just glared at me, until I scuttled sideways, then continued barreling down the sidewalk. I’m not clear what game we were playing, but I’m pretty sure I lost.

This doesn’t mean they’re not nice. Though no self-respecting New Yorker would cop to a descriptor as wimpy as “nice.” Loud and pushy translates into exuberant and interesting if I remember my place. After all, this isn’t my world, it’s theirs.

When my “thank yous” were overly effusive, eyes rolled. When we stopped and waited for the light to change, people tripped over us. Rude is a cultural construct after all.

On the other hand, advice and opinions are freely offered in New York. Most people we talked to were eager to show off their city and give us their best efforts (the rest were simply hustling us for tips). There was the policeman who gave us directions, then outlined the itinerary he felt we should follow for the rest of the day. And the matriarch of a Greek diner we discovered (read: stumbled into while looking for something else) who knew exactly what we should eat… and was right. New Yorkers have a brusque charm that is strangely appealing.

If you ask my daughter what the highlight of our New York trip was, she’ll tell you all about “Wicked,” the Broadway show that stole her heart. It was brilliant! 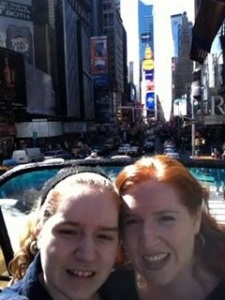 But my highlight didn’t come with a playbill or a souvenir postcard. The best part of this trip was being just us. With a big(ger) family, with the extra demands of special needs children, with her serious dance commitments and homework and paper route and growing social life, I don’t get much time to enjoy her – something I know will only get worse as the next few years fly by.

Turning 13 is a huge milestone. We wanted our own “rite of passage” to celebrate with our kids, so years ago we came up with a plan. We discussed the bat mitzvah-style parties and coming of age rituals which are becoming more and more popular, but they just weren’t “us.” A trip, however, with its concentrated one-on-one time and attention, a shared experience, an adventure, a memory… that has “us” written all over it.

Of course, NYC is more ambitious (read: expensive) than we envisioned, but it has been priceless.

I thought I would take this opportunity to parent intentionally. I thought we would have an important episode of the sex/boys/self-worth conversation, with forays into girl politics, healthy choices and 14 reasons drugs are for losers. But those are part of our ongoing discussion. She hardly needs an official sermon at this point, because we’ve been talking about it all along.

Instead, we had fun together. Turns out, that’s not a less important parental function after all. Especially when we are navigating a new level of independence on her part and more of a supporting role on mine. Turns out, that’s what we really needed.

You already know that I love you. That I will fiercely protect you, and relentlessly hound you to do chores, and expect the best from and for you, and pray for you, and catch you when you fall.

But do you know how much I like you? Do you know that I WANT to spend time with you? That I think you are interesting, and bright, and kind?

We might not always get along like we do now, but that’ll always be there. When I look at you and when your Dad looks at you, we see more than what is. We see the best version of you.

Hopefully, because of this, you can see her too.

I saw her a lot this week, grinning at the camera in cheesy poses all throughout New York. She’s a lot of fun! I’m so glad I got to know her a bit better this week!

The best way to see NYC has nothing to do with maps, or itineraries, or even tour guides… the best way is to see it with someone you have fun with.

So here’s us, travel buddies, explorers, friends… a great way to start the teen years. I’d highly recommend it.

Still to come… visiting my nephews (oh, and the grown ups who live with them, whom we also love, though they will forever be eclipsed by the cute babies).