What I Believe: Embracing a Bigger Gospel

This is a record. I have never spent so much time, so much energy, so many words on a single blog post. Thus far, I have written 2 complete drafts, only to scrap them entirely and start again.

I had promised another edition of my What I Believe series (where I broke up with my church and decided I’m not sure of anything), to whoever might still be interested in my post-evangelical philosophies (concerned family and new church friends mostly).

The first one I crafted was full of scripture references, arguments and intellectual debate. Like I’d  been taught. A gospel staked out in careful boundaries, defensible territory against the attack, with a few darts strategically thrown at the theology I once called home. A gospel of knowing.

The second swung the other way entirely – a way we’ve only recently embraced. Apologizing for the years I believed that I (and those like me) cornered the market on truth. Offering questions in place of answers. Exploring a God who reveals himself through a bigger story, defying simplistic outlines and smug certainties. A gospel of not-knowing.

The truth is, I find myself somewhere in the middle. I wish I had the wisdom, ability and time to properly express the flavour and freedom of this knowing-but-not-knowing journey we’re on (no doubt this sounds utterly absurd to many of you – it certainly would’ve to me, until recently). We are Christians, but not the way we used to be.

The gospel I once knew

In this context I’m using the term “gospel” to refer to an overarching central truth, specifically as it relates to the purpose and message of Christianity. It is used interchangeably in many churches with the phrase “the Good News.” 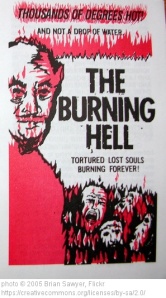 The gospel I have believed most of my life goes something like this: God created humanity, but we rejected him (sin) and are as a result condemned to an eternity of punishment (hell), but God loved his wayward creation, so He sent his own Son (Jesus) to become human and take that punishment on himself (dying on the cross and rising again), now everyone who consciously chooses to believe this gospel (usually praying a prayer or having a spiritual experience) and live a Jesus honouring life (not as a prerequisite for, but as an inevitable proof of your sincerity) will become favoured children of God and eventually escape punishment.

This belief was the filter through which I understood the bible and the world around me. It was the motivation, sometimes inspiration and sometimes guilt, behind most of our life decisions. In theory, all evangelicals consider themselves missionaries. We wanted as many people as possible to know God and escape an eternity of brutal torture (and we would have been evil schmucks if we didn’t). It’s hard for people outside this paradigm to fully appreciate how all consuming this worldview is.

A few years ago, a close relative of mine decided that there were only 7 righteous people left in the world (including him). Because that’s what the bible said. To him. He believed it sincerely, and everything he read in scripture and saw in the world only confirmed this further. It was his filter.

It seemed clear to us that he wasn’t thinking straight. This was not logical, nor was it an historically acceptable interpretation. But it seemed evident to him.

It’s entirely human to see what we want, what we expect. This is how we make sense of the world. It’s how our brains work. And we all do it.

Christian Smith describes this phenomenon when it comes to understanding the Bible as putting a puzzle together. Whatever picture you see on the box, that’s how you fit the pieces together. Some pictures (systems of belief) fit better than others and are more widely accepted, but there are always a few pieces that don’t work as well. We filter those through the words and ideas that seem more important, more central to our big picture, whatever that happens to be.

The picture on the box

But faith is not about perfect understanding or certainty, it’s choosing a confident hope. I still believe. I believe that a loving God created the world and redeemed it through Jesus Christ. I believe this powerful grace stretches farther and wider and deeper than I ever imagined.

This is the good news I embrace. A gospel where love has the final word; where Christ’s sacrifice to redeem all humanity is powerful enough to do just that. The picture I see is one of “Ultimate Redemption” – that while there will be judgment and may be punishment, in the end, all will have a clear understanding and ultimately be reconciled to God. To me, this picture better reflects the overarching story of a broken world and a loving Messiah than an extremely limited redemption of those who adhere to a certain theology, say the right words in the right order (sinners prayer) or live a certain lifestyle… most of whom are born in a specific time and place where this is a cultural inevitability.

This is not a new position. Historically it falls within the orthodoxy of Christianity, though some modern evangelicals like to believe otherwise. Even Gregory of Nyssa, who edited the Nicene creed (which is widely accepted as the most basic definition of Christian orthodoxy) taught this, along with several other significant fathers of the early church.

When Jesus taught about the Kingdom of God, he didn’t diagram, or alliterate, or clearly outline the steps to get in – instead he told stories. “The kingdom of God is like this…” he would say. Telling ridiculous stories about a love that defies the rules, that was, and is still today, a scandal to good, moral people.

Jesus declared freedom to the oppressed, an end to the Law and an inclusive grace. This is the picture I see now, and it fits. I’m trading in systems of sin management, a focus on who’s in and who’s out, a fear-driven and defensive perspective – for freedom. To trust that Jesus has both the power and the will to reconcile all things to himself. To extend the same unconditional love to others without agenda (which sounds pretty, but can actually be very uncomfortable). To see that there is more to truth and to life than my own perspective – but all truth is God’s truth, so this is nothing to fear.

The kingdom of God is like this: we need, God provides.

For God was pleased to have all his fullness dwell in [Jesus],
and through him to reconcile to himself all things,
whether things on earth or things in heaven,
by making peace through his blood,
shed on the cross.
Colossians 1:19-20

So here’s me, embracing a new picture of God and the world around me.

Stay tuned for my final installment:
What is a Progressive Christian Anyway?
Why I support feminists, gays, tree-huggers and other crazy liberals Mark Driscoll has been warning you about.